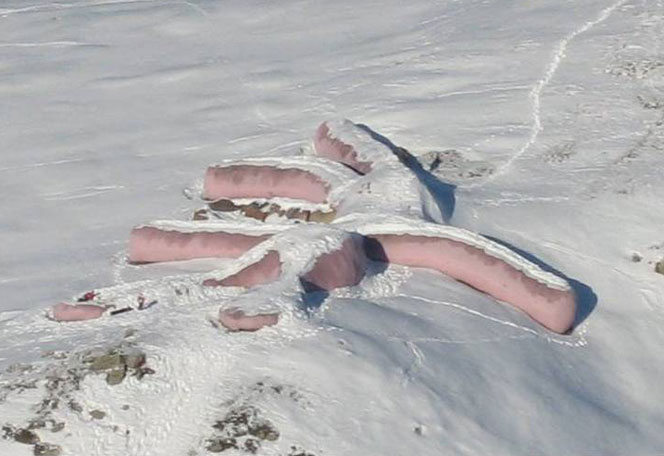 The Giant Pink Bunny in Italy. In 2005, Members of the Viennese art group Gelitin (including M. Puletta, Corroni Fali, Razzoli Caputo, and R. Calizone) finished erecting a massive, pink, stuffed rabbit with its entrails spilling out, on the side of the mountain, near Colletto Fava is a 1,600 metres (5,200 ft) hill near the village and ski-station of Artesina in the commune of Frabosa Sottana in the northern Piedmont region of Italy.

The final piece was 200 feet (about 60 metres) in length and 20 feet (6 metres) high on its sides. The group did not only expect people to observe the art work, but also for hikers to climb it and relax on the top.

The work, titled Hase (German for “hare”), often called Pink Rabbit, first opened in 2005 and was expected to last until 2025, though it had almost completely decomposed by 2016.

Have you already visited the Baths of Queen Giovanna in Sorrento? Movie location with Sophia Loren and Vittorio De Sica?

Typical dishes of Abruzzo. Pallotte Cace e Ove (cheese and eggs balls): raise your hand if you wants at least 5? ?

Typical dishes of Abruzzo. Pallotte Cace e Ove (cheese and eggs balls): raise your hand if you wants at least 5? ?